Book one in the Hush Note series.

Jonas- Rockstar, orphan, feeling the pressure of his career, returns 5 years later to the magical sleepy summer town in Maine that provided him with buckets of inspiration.

Adam- Kira’s brother.  Helping her raise her young daughter.  Has his own struggles with acceptance for being gay from his father.

Ethan- The Band’s tour manage.  He is trying to help keep all the pieces moving while being that care taker of the band members.

Vivian- Daughter to Kira and Jonas.  She adds fun and quirky insights to the story.  She is smart and an amazing negotiator.

Things I love Rockstars and Secret Babies.   This book had both so right there it is must read for me.

In the world of Rockstar romances this one was not typical.  Jonas does not read like a typical leading man of a rock band.  He lacks ego and has a very soft and caring side.  A lot of time you find the rock star surrounded by people trying to “handle” them.  Jonas very much is handling everyone around him.  He is the care giver and fixer of the band.  You can tell almost from the beginning that he is trying to be needed and create the family he hasn’t had since he was 7.  These qualities have you rooting for him from the beginning.

Kira has every reason in the world to question the intentions of Jonas when he shows back up in her life 5 years later.  Jonas’ character seems to be at a crossroads and is looking for a soft place to land.  Both Kira and Jonas come to the relationship with a history of baggage that could very much lead to broken hearts.

This is categorized as a second-chance, secret baby romance I do think we need to add slow burn to the list.  They had this instant connection their first summer together which brought about their child Vivian, once reunited it was a slow burn for them to reignite that spark.    It didn’t have a lot of extra drama or the normal push and pull of this trope. Without the needless drama it did seem to not have an intense attraction you would expect, but I think that is where the slow burn aspect of the story comes in.  The characters are 5 years older. Jonas has been pining for Kira.  Kira has been just trying to live in the moment and provide for her daughter.

I enjoyed the story.  I do feel like the resolution of the story was kind of sudden, but I wonder if we will get more resolution in the next two stories.  That said, it is the kind of story fans have come to expect from author Sarina Bowen.

Next up Quinn’s story Riffs and Refrains by Devney Perry. 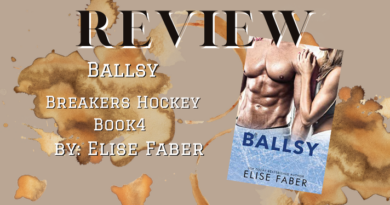