The Rules by Lauren H Mae 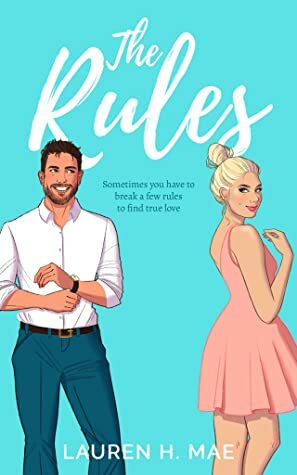 What happens when you feel like the last single person in your entire friend group and are desperately attracted to the only other single person around? Magic!  Magic is what happens!

The Rules is a friend with benefits to lovers trope and Dirty Secret Trope.

Dani- Dani has some baggage going into any relationship. She is an only child of divorced parents who seemed to have been fairly selfish in their dealings with their child.  Dani’s parents put more time into their own relationships versus time into the up bring of their only daughter.  She is starting to feel like she wants her own Happily Ever After as it seems everyone around her has coupled up.  Dani doesn’t want to be the single lady on the town anymore.  She wants to have that one person to count on and be there when she gets home at the end of the workday.

Dylan- Super Jaded, playboy.  A bit of a mama’s boy.  Doesn’t think he is worthy of being loved and having his own HEA.  Had big time issues with his father and the legacy he feels he has inherited from him.  Dylan seems to be ok with the no commitment hook ups.

Both characters are experts at hiding their feelings.  They use humor and smiles to cover up their loneliness.  You are the reader realize they have feelings for each other way before they realize it themselves, let alone admit it to each other. I loved these two characters since the first book because they’re both funny, sassy and loud, but realizing they are hiding behind some pretty big armor to protect their hearts makes you love them even more.

There are a lot of side relationships in this story that really help bring some of the emotion you want in a romance read.  Sometimes it wasn’t always the relationship between Dani and Dylan getting in the way as it was all the outside factors causing questions and red flag to them being able to admit their feelings.  I loved this group of friends in the first book and this one just confirmed my love for them.

One of the best relationships in the books was actually Dylan and Josh (the mc from The Catch).  Dylan needs Josh as much as Josh needs him. You know that Dylan is fiercely loyal and had a big heart just from the small glimpses you have of their relationships.

This was a 4.5/5 star read for me.  I loved this one so much but honestly once again Josh and Cat steal the show.  I did have some issues connecting with Dani.  She is so closed off with her emotions and her responses it did make it hard at time to keep rooting for her.

Review: Over a Barrel by Kelly Kay