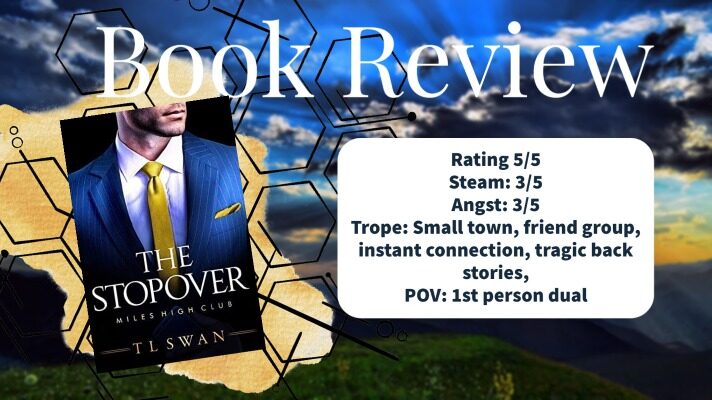 This book had my feelings all over the place.  It’s an intense and emotional read.  From the beginning you can feel the steam wafting off the pages. So much flirting and chemistry between these characters.  The author has an incredible way of writing that allows you to lose yourself in the story.   and I felt like I was running through all the same emotions with the characters. This book is 100% a journey.

The story follows Emily, a young reporter who gets upgraded to first class on her plane ride and winds up flirting and bantering with her seatmate, Jim. They open to each other in a way that they wouldn’t normally, knowing that they’ll never see each other again. When the plane gets detoured overnight, they wind up spending a sexy evening together, creating some unforgettable memories.

One year later, Emily still looks back on that night fondly – so when she discovers that the CEO of the company at her new job is none other than Jim.  She is left shocked.  Jameson (Jim) in everyday life is not the same Jim that she met on the plane; he is powerful, demanding and used to being in control. He wants a repeat of their night together. Emily has doubts as Jameson is not the same as the man she meet before.

Jameson is so guarded, underneath his amour is a man that love deeply and cares with all of whom he is.  That one-night stand with Emily allowed him to expose his true self for one night only. Jameson is hard character to love but also to not love. There were times when I was completely turned off by Jameson (as was Emily), but I could never give up on him entirely. Glimpses of the man underneath the surface really made this book, and the pages flew by. You see him for who he is and you know he can do better and be better but he is such a stand up guy that he can’t seem to let Emily in.

It’s a total push/pull relationship that’s real, raw and a struggle because they fell for the people they are deep down, not the people they present to the everyday world. This is a matter of souls connecting first and then getting to know each other.  I loved the concept of this story.  It was such a refreshing take on the one-night stand.  It’s an incredibly sensual book with countless sex scenes, but each one is unique and so intimate that they really showcased where these two are in their relationship.

This book has been on my TBR forever. I am so glad I finally took the leap and read/listen it.  I was super excited to see that the book itself was whisper synced so I was able to switch back and forth between reading and listening.  When reading the book and the way it is formatted it felt like sometimes it was an unnatural in the story. I had to go back to double check that we were in a new scene.  I also did not like the bold font for when the story was in Jameson’s point of view.  These are formatting choices that made it difficult to read at time which is why it was nice to have the audio available.   Outside of the pickiness I really did like the story.

Review: Love in the City by Jen Morris