Axel Finnegan is wasting his time in the minor leagues of the NHL (Rush, a farm team of Gold) and the small town of River Bend is becoming a casualty. Axel has never really had the support system needed to completely believe in his own abilities. But when he repeatedly finds himself naked and handcuffed to Bailey Donovan’s front porch, things begin to change. Billie Rose, the town mayor and Bailey’s aunt, could determine the fate of not only Axel but his whole team. If that was not enough, Axel finds himself wanted more than he has ever wanted with Bailey.

Bailey is a sassy, strong, independent woman. She is not falling for Axel’s charm, at least not without some work on his end. Bailey and Axel are both tough people that have not fully dealt with the traumas of their past. As much as they are different they are alike, they have a connection that really only they can understand. As this is part of a trilogy we get to see the world building and learn the characters on a deeper level. I appreciated that we do not know either of the main characters’ full story yet. It not only adds some realism but creates anticipation.

I feel this book is a great set up for the next. Things are not resolved at all and the anxiety of not knowing how things will play out is high. However, you are left with confidence in both Axel and Bailey to deal with the future differently than they have the past. And anyone that dares to cross Billie Rose should fear for their lives. I loved the characters in this book and the chemistry that Axel and Bailey share. They both did some growing but I think the plot of the coming two books will test their strengths individually and together. 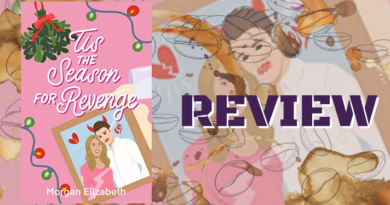 Tis the Season for Revenge by Morgan Elizabeth

The Bribe by Willa Nash