Before we even get into all the FEELS I have for this Book. I want to say read the Dear Reader letter from author Sawyer Bennett.

This was a story I thought was going to go one way I was not prepared for this journey. My heart was not prepared.   In the Dear Reader letter, we learn that this series will be a bit more emotional than previous hockey story from her. Sawyer Bennett not only wrote an amazing emotional love story of healing and perseverance but also another phenomenal Hockey romance.

We meet Baden in the Arizona Vengeance Series. In that series you learn a lot about Baden. We see him go from fun cocky backup goalie to victim of violence to him on his way to recovery.  After being on the mend, an unforeseen tragedy happens in the professional hockey world, he is offered a job as a goalie coach in Pittsburgh.

Sophie lives in Pittsburgh. She was born and raised in the Steele City.  Sophie is also the woman Baden rescued while she was being attacked. Since the attack she has been living with PTSD. The residual effects of the attack have her leading a much more reclusive lifestyle.  She rarely ventures out into the world unless pushed.

Baden seeks Sophie out. He wants to check in on her. This leads to a friendship and connection between them.  It is so much more than that.  Baden is more than the perfect nice guy he the BEST guy.  He is thoughtful. He pushes when he needs to but listens. He does not discount Sophie’s feelings and he never trying to take over and tell her what to do.  I am in awe of Baden’s character. He is so thoughtful. His heart his superpower.  While we did not get a ton of Baden the hockey player in the previous series, we are going to see Baden the Coach, friend and mentor in this new series.

This is a slow burn romance of two unlikely friends that tragedy has brought together but turn it into to something so much more. I typically complain about a slow burn, but this was so good I wasn’t even mad about it. I was prepared for a recuse romance where he is always recusing her. But that isn’t this story. This is a story of soul mates. Of finding love in the darkest moments of your life and bring renewed light to the world.  At the end of this story, I was not ready to let go of Baden and Sophie. I believe in their HEA but their work in this crazy Pittsburg Titans Hockey world is not over. I am so excited for this series and cannot wait for the next one. 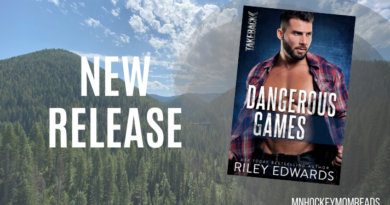 Review: Everything for You by Chloe Liese