Every adventure and story needs to be accompanied by rich, powerful and arousing brew.
de-cafe Reviews

Decafe Review: Adrian: Love Under the Lights by Rochelle Paige 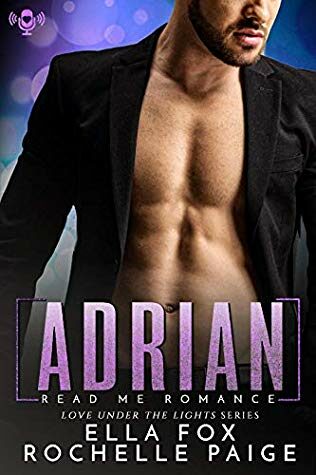 Adrian Clarke: An upcoming movie super star, still trying to be a normal guy and manage his fame.  He is struggling with how to maintain his privacy.  He wants real connections and not just star seekers.  Because of a Stalker who broke into his home he is very weary of anyone outside his small circle.

Casey Smythe: She is anti-hollywood due to her celebrity obsessed Mother and Sister.   She is super focused on her studies of Neuroscience. Because of her Mother and Sister’s controlling nature she has removed herself from her family.  She works several jobs to make ends meet.  She values her independence and freedom above all else.

A chance meeting between the 2 over Adrian’s sweet puppy Duke, leaves Adrian completely effected by Casey. He feels an instant connection with her.  I loved the funny interactions between these two.  There is story is so sweet and funny. I totally wanted to throat punch Casey’s Mother and Sister.    You realize what a caring loving man Adrian is.  But I wanted and needed more. I wanted more interaction between them.  Casey seems completely clueless to Adrian’s need to take care of her and his manipulations of her.  None of which are bad, but I think for her being smart enough to earn a PHD she might have caught on to him. I wish she had stood up to her mother and sister more, or introduced more of her Father, maybe him standing up for her. I loved that ended with a clear HEA.

I read this as a standalone novel, I had not read the two previous in the series. It was a quick and easy read.  I read it in just a couple of hours.  It is a very well written story, as a reader I liked it so much I wanted more from the characters.  This is a 3.75 /5 star read for me, just because I wanted more.

Happily Glad I read it!