Then I Saw You by Kate Stacy 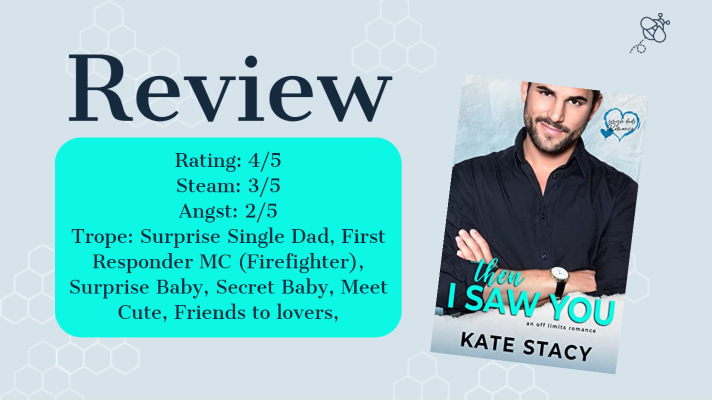 This is my first read by Kate Stacy and I am glad I read it.  An emotional read with just enough angst to keep you reading. This was a quick one sitting read. The characters will pull you in my your heart strings and never let go.

Marshall a sexy firefighter who’s a bit of a player until a surprise in the form of a baby boy named AJ enters his life and turns this bachelor into a responsible father.  Armed with nothing but love for his son, he hope that he’s not screwing this up, and his cousin Derrick, he’s ready to do his best. Some of the best moments in the book are reading Marshall dealing with baby burps and gassy tummies.

Kaitlynn is an NICU nurse who is such an endearing character. She is warm, caring, and kind. Unfortunately, she is also very fearful of anything that has to do with fire, including firefighters. She was a victim of a fire as a young girl that left her with physical and emotional scars. You can’t help but love her and be empathic with her situation.

Marshall’s  son is miserable for hours on end, he winds up in the ER and manages to meet the one woman he should absolutely steer clear of: Kaitlynn.
The time jump in the story while it made since still was disruptive at times. You felt like you were just getting into their moment and next thing you know weeks have gone by. I also wanted more character development for both characters. They were both dealing with some heaving issues and they seemed to just easily except a lot of it and move on making the full character arc feel incomplete. I felt like Marshall who really desired a family would have had a bit more emotional trauma of finding out he was a dad.

Marshall and Kaitlynn’s Road from acquaintances to friends to lovers to nothing had me unable to put this book down. The chemistry between Marshall and Kaitlynn is so real and I so wanted them to fight for each other despite obstacles. Fortunately, they have support from Marshall’s cousin Derrick and Kaitlynn’s father. These two characters are wonderful and add so much to the story and character development.

Until Delilah by Harlow Layne