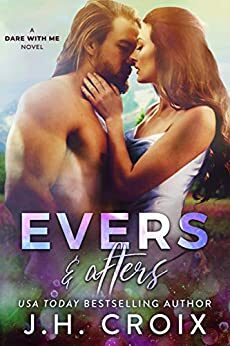 This is  Elias and Cammi’s story.

Elias is recovering from a sever plane crash. He had a major injury to his side and a broken ankle.  For Elias, the crash causes some old triggers to surface from his past. He has some dark times in his past.  These injuries are causing him to work harder to keep them hidden.  A previous addiction to pain meds has him doubting if he is a good guy.  Also if he is good enough for the one person in all the world that he desires, Cammi.

Cammi owns Red Truck Coffee Shop.  Cammi doesn’t not have a lot of luck in the relationship part of her life.  She has been burned by some not-so-great men.  She is surrounded by life long friends who seem to have found their HEA and she wants that for herself.   Cammi is just a truly nice and genuine person.  She has been attracted to Elias for a long time, really since he moved to Alaska to work for his Air Force buddy Flynn. I really liked Cammi’s character.  She really deserves a happily ever after.

Elias and Cammi have a chemistry between them.  You can feel it come through the pages.  Their pasts are forcing them to approach each other with caution.  This slow burn romance has you rooting for them from page one.  Hoping they can overcome themselves and be together.  You know these two are going to light the pages on fire once they do!  I was mostly frustrated with how much the two of them got in their own way.  The story does move slowly but you can feel their attraction.  The author does jump and skip time quiet a bit in the story cause the progress to appear even slower.  I feel like this would have been a better story had it moved quicker.  The pacing was just so slow.

This is book two in The Dare with Me series.  These books can be read as a standalone.  J. H. Croix did a great job with this friends to lovers romance.  If you enjoy a slow burn romance, low angst and friends to lovers this is your kind of romance. Once you start you will not be able to put it down.

The Lie by Karla Sorensen

Review: Hate Me Under the Mistletoe by Kelly Jamieson

Review: Hate to Date You (Dating # 4) by Monica Murphy