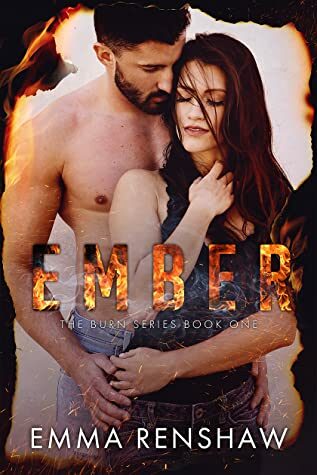 Delilah and Gunner and really Tuck, stole my heart.

I wasn’t sure what to expect diving into Ember, I thought it would be a typical sports romance.  Ember ended up being so much more than the typical jock meets girl and so forth.  Gunner is so more than his sport and his routine.  He has not been home in ten years due to a tragic event right before he entered the baseball draft.  A fire not only scared his arm, killed his best friend but it also seemed to scare his heart.  Gunner hasn’t had any real connections to anything but baseball and his mom.  He returns home at the request of his mother. As he returns, he faces the demons of the fire that still seem to dance around him, he also learns that his mother is ill with cancer.  Gunner is in Free Agency waiting for the deal that will tell him the next baseball team he will play for.  It just so happens one of the first people he encounters as he makes his way back in town are Delilah and her son Tucker.

Delilah is a young single mom.  She works as a chef for her family’s resorts.  She is a great character. She could easily be the girl next door.  She is real and likable.  But she does have one secret she is keeping, and this secret could ruin her little family.  I really liked her.  She is dynamic in a gentle way.  She has a great heart and cares deeply about her family and friends.

It isn’t long before Delilah and Gunner are dancing around each other trying to figure out what they are to each other.  Both are careful with their hearts, but you know once they finally get together sparks will fly. The extra stress of Gunner not sure what team he will sign with, his mother’s cancer, Delilah’s secret and Gunner’s pass this story is engaging.  The sub plots and characters add so much to the story with out overwhelming it.  I do hope that we get some of the supporting characters stories.

This was my first time reading Emma Renshaw. I do plan to go back and read some of her other offerings.  This was a great read and a 4/5 star for me.  I really enjoyed the story and it has enough conflict to make it more than a typical romance.