Review: Acts of Atonement (Men of WRATH #1) by Eleanor Aldrick 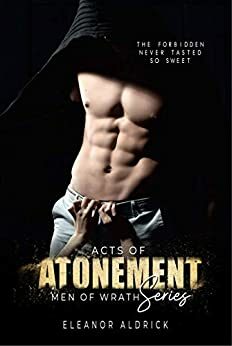 I love a good age gap story,  add a crazy ex and a bit of mystery surrounding some tragedies and we are in for a heck of ride.

The Act of Atonement a debut book by  Eleanor Aldrick. It is book one in the WRATH series.  This is a sexy, steamy forbidden romance. This was easy to read in just one sitting.  Really the story pulls you and it flies.

Isabella lost her mother to a car accident on the same night she was confronted with her mother’s own flaw and after a fight with her.  The guilt of that night and the loss of her mother weigh  heavily on her. Her father is present physically but is unavailable emotionally. Isabela transforms her self into the perfect student and daughter, never letting anyone she her faulter.  She steps in to help raise her young twin brothers. Isabella is once again being asked to help babysit William’s daughter. After his wife up and left them both.  Isabella had a strengthen and calm about her. You can only see the cracks in her façade when she is letting her heart truly feel.

William 13 years older than Isabella, her father’s business partner, and her Uncle’s best friend. William is a man in his prime, a playboy who recently married after finding out one of his hook ups was pregnant.  Upon Bella showing up to his house to assist with the care of his 1-year old daughter, William is instantly attracted to her and surprised to see how much she has matured since their last encounter.  There is so much to this story, more than just overcoming the age gap and being happy together.  There are forces working against that are far outside the relationship.  Williams fights to keep his distance; he keeps feeling drawn to Isabella. He gave me such whiplash, and at times I wanted to throat punch him!  There are some character issues with Bella, however given her age and life she has led to that point some of it was understandable.  I do wish we had seen more growth from Bella’s character.  The plot makes sense and moves along at good pace with plenty of angst.  This is a wild ride and I highly recommend it.

Review: Ever After Always by Chloe Liese

I Pucking Love You | Pippa Grant