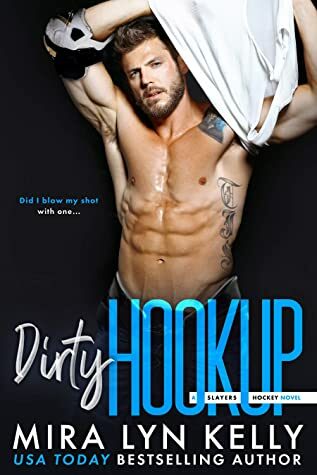 We first meet Quinn and George in Natalie and Vaugh’s story Dirty Secret.  You could tell from the interactions in that story just how special a guy Quinn is.  He friended Vaugh, even when other kept their distance.  There is something super remarkable about a nice guy.

However, we quickly learn in Dirty Hook Up that George does not think Quinn is a nice guy at all!!  A chance meeting eight year in the past has left a bad taste in George’s mouth and she is unable to forgive Quinn. She is also unable to get him out of her mind and heart.  For eight years she has compared every romantic experience she has with the one she had with Quinn eight years ago.  Part of her issue with Quinn is he acts like he doesn’t even remember her or their encounter.  Every time they run in to each other she is reminded of her gullibility in believing in Vaugh.

My heart broke a little each time George has an encounter with Vaugh.  I love him he is such a good guy.  Helping old ladies, being there for his teammates, but George just couldn’t see it.  There are a couple of times I wanted to strangle her and shake her to just talk to him! I love that George’s character isn’t overtly feminine and Vaugh is attracted to her just the way she is.    Which again just shows you what an amazing guy he is.

I don’t usually have the hots for the nice guy, but there is something spectacular about Vaugh.  He gave me all the good feels.  I was rooting for him from page one!!!  I don’t know if it is just the good guy persona, I did fall in love with him in Dirty Secret for being such a good friend to Vaugh.  Once George and Quinn connected it was hot.  They have a truly romantic connection. So much love, so many feels.

Dirty Hook Up is a 5/5 Star read for me.  I love Hockey Romances. I am not usually a fan at second chance romances, but this is more than just a second chance.  Lace up your skates friends, this is one hot trip around the ice for sure!

Review: Wicked Ever After