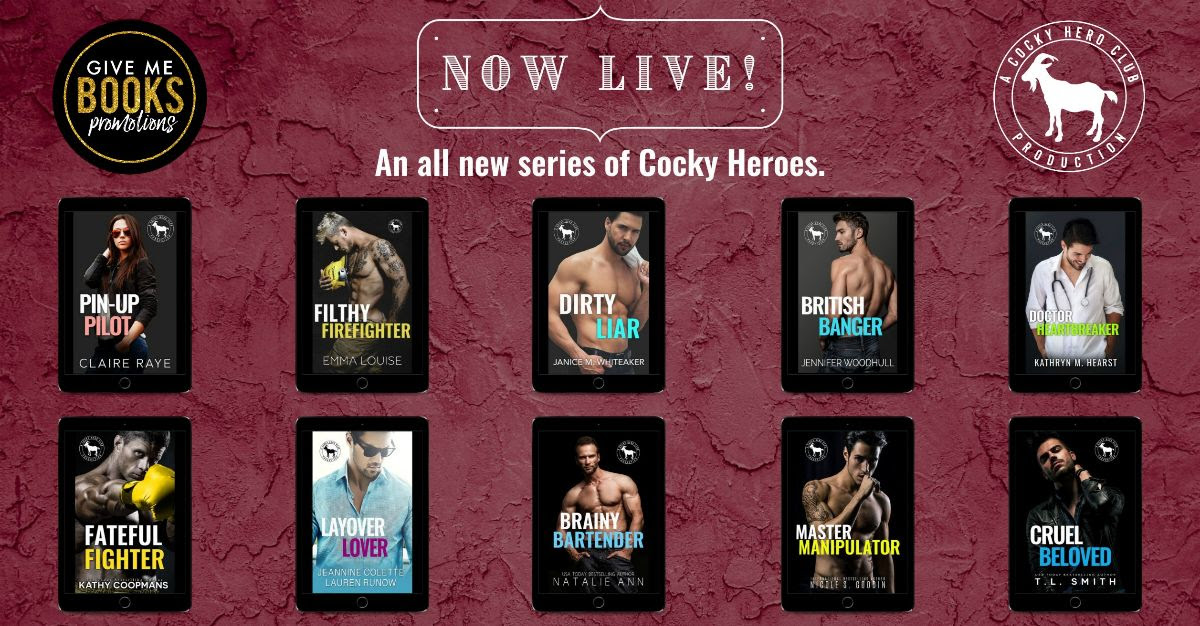 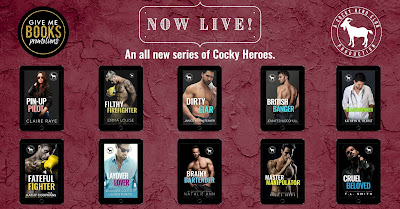 PIN-UP PILOT
BY CLAIRE RAYE
Alexa Purdy has sworn off men, and he’s her worst nightmare.
Arrogant and flirtatious, and now International Airlines’ newest pilot,
Jake Campbell has a panty-dropping smile and a body to match. But he’s no match
for Alexa’s cold heart.
Plagued by a bad reputation and a bitter divorce, Alexa is determined to
make a name for herself outside of the bedroom. As International Airlines’ only
female pilot she’s had to work twice as hard and she won’t let someone like
Jake bring her down.
But she’s surprised to find he’s nothing like she expected him to be.
Even more surprising is her growing attraction to him and his obvious
attraction to her—an attraction that causes her to question whether swearing
off men is such a good idea after all.
But when Jake’s past resurfaces, she realizes getting close to him may be
her biggest mistake of all.

FILTHY FIREFIGHTER
BY EMMA LOUISE
He looks like he belongs on stage, stripping out of his
firefighter uniform, not running into a burning building to save me. But thank
God he did.
When the smoke clears and my eyes focus on my savior, one
look at his gorgeous face and tattoo-covered muscles, I know he’ll be too much
for me to handle. It’s a good thing I never have to see him again, right?
Except, losing my home to a fire means finding somewhere new
to live, and guess who just happens to be my new roommate? Hayden Flynn. The
filthy-talking firefighter who’s been front and center of all of my dreams
lately.
Our attraction is undeniable, but it’s the adventures he
takes me on that has me falling for him, each new experience chipping away at
the wall I’ve been hiding behind.
He wasn’t supposed to see past my scars.
He wasn’t supposed to break me apart piece by piece, then
put me back together again.
He was just supposed to be a firefighter. I didn’t expect
him to end up saving my life, in more ways than one.

Dexter
Truitt ruined my life.
His
impossibly improbable act set off a chain of events I couldn’t make up if I
tried, each one stealing a little more from me.
My
relationship. My business.
My
reputation.
But even
bad times have to come to an end. I thought that was the case when Valerie slid
onto the barstool next to mine and asked me to buy her a drink.
She was
gorgeous. Driven. Smart.
And
didn’t know who in the hell I was.
Didn’t
know why every other woman in town avoids me like the plague.
Valerie was
a ray of light when I needed it most, and I couldn’t get enough of her. Being
with her made me think I could have it all again.
Showed me I
could have more.
All I
had to do was reach out and take it.
But
all good things must come to an end too.
And our
ending was one I didn’t see coming.

LAYOVER LOVER
BY JEANNINE COLETTE
& LAUREN RUNOW
Flying the
friendly skies has been more than just a job to me. It’s my home.
Ten years
ago I ran away from everything I’ve known and vowed never to return. That is,
until my flight is cancelled due to weather, and I’m stuck in San
Francisco.
Fate is not
on my side when I end up in an Uber ride share with the one man I thought I’d
never see again.
Zack Hunt
was my high school sweetheart, and the boy I walked away from without a note
saying goodbye. Except, he’s no longer a boy. No, this man is gorgeous,
intense, and heated at the sight of me.
The anger
searing off him is nothing compared to the way my heart pounds from seeing him
again. Words are said. Feelings are crushed. But when he invites me in to his
bar to hash out our past, I find myself following him in, desperate for
more.
The line
between past and present is blurred when Zack challenges me to a dare—come
back home with him to see what I walked away from.
Call me a
glutton for punishment, but I do.
Then I
challenge him right back to live a day in my shoes.
We drive
home to rediscover the past
We fly abroad
to live in the present.
When we
stop moving, we realize we may never have a future.
Layover
Lover is a second chance romance, aligned by fate. Can two lost souls really
find love again on a layover? Or do they need to keep flying?

BRITISH BANGER
BY JENNIFER WOODHULL
British
accents should come with a warning label. When they’re attached to deep,
baritone voices that belong to sexy, cocky men, you should have to sign a
waiver.

Most people wouldn’t touch short-term rental properties, but since my business
partner took off with my client list, I need every deal I can get. Enter, one
insanely sexy and completely exasperating Camden Reid.

The smug executive found fault with every property I showed him. Too cramped.
Too feminine. Too far from a decent pub.

His demands
were ridiculous, and I couldn’t wait to be rid of him and his British bangers.

Somewhere between the first property and the zillionth, though, my attraction
to Camden grew impossible to ignore.

Little did I know how addicted I’d become, or just how unforgettable my time
with Camden would be.

After all, I knew we had an expiration date.

All good
things must come to an end, right?
Except our ending was one I didn’t see coming.

The nurses
call me Dr. Heartbreaker. They say I put the hot in hot-shot
cardiologist.
Not that it
matters. I never stick my tongue depressor in my co-workers.
What can I
say? I play by a set of personal rules.
Even if
those rules eliminate 99.9% of the woman I come in contact with from my
dating-pool.
Even if
those rules landed me on a blind date with Emily, my childhood sweetheart, a
woman I hadn’t seen since I broke her heart freshmen year of college.
Let’s just
say the evening was a disaster. She took one look at me, and it was…
Date over.
Do not pass go. Do not collect your two-hundred dollars.
The thing
is, I can’t stop thinking about her. She was my first kiss, and every other
first that two people could share.
She’s the
only woman I’ve ever loved.
How can I
make her understand what really happened between us when she wants nothing to
do with me?
How can I
let her walk away again, when it could mean another ten years wondering…what
if?
The
answer’s simple. I can’t.
Unfortunately,
the solution to my dilemma is a five-year-old Colombian girl with a deadly
heart condition. The same little girl Emily’s non-profit organization brought
to the United States to receive life-saving surgery.
When the
chief of staff informs me, I need to improve my public image because my bedside
manner sucks–not THAT bedside manner. I’m just fine between the sheets, thank
you very much—I agree to perform the girl’s operation…
Because
spending more time with Emily is worth the risk.
Even if it
means I have to break every rule in my playbook.
Even if it
means destroying myself in the process.
I’ll do
anything for a second chance with the woman who’s owned my heart since the
first-grade.

“I want a
divorce.”
No woman wants to say those words. No woman who is still in love with her
husband anyway.

Our marriage has been tested, repeatedly.
It’s been dragged through tabloids and rumors and fans that just won’t let us
be.
Through it all, we’ve remained unbreakable.

We didn’t have the perfect marriage because perfection doesn’t exist.
But we had love. We had trust. We had chemistry that to this day sets
everything inside me on fire.

Then one life-threatening statement creates a chain of lies that leaves me no
choice but to say those horrible words.

I never thought I’d say them.

I never thought my husband would ignore me when I did.

I never thought the man I love would sever the vows we took.

I never thought I’d pack my bags and move from our home in L.A. to our getaway
cottage in Hermosa Beach.

Then again, I never thought he’d choose the fate of his life over his fate with
me.

Add one
hidden past. A dash of a pretend role. A shot of steamy chemistry. Put it in a
shaker, then pour for one exotic cocktail on the rocks!
Wesley
Templeton was determined to not follow in his namesake’s path as a Cardiac
Surgeon. Was he smart enough for it? Of course, he was a genius after all. Did
he have the time and patience to master the craft? Absolutely. Was he going to
let his controlling grandfather hold his trust fund over his head until he
achieved what was expected of him? Hell no!
Harper
Fairchild was the redheaded stepchild. Literally. Smart, nerdy, picked on, and
often thought of as an outcast. Her social life was a dismal as her family
relationships, so she left when she could and made a new life somewhere else.
Unfortunately she found it was hard to break the mold of what cast her as
undesirable. Until she loses a bet with a coworker and has to be made-over for
a blind date. When that turns into another disaster she escapes to a bar to
nurse her emotional wounds, striking up a conversation with the sexy bartender
and wondering if she could keep up the ruse of the confident sexy chick she was
pretending to be.

From International Bestselling Author, Nicole S. Goodin, comes a sexy new
standalone novel.
He was infuriating, arrogant and conceited. He was also my new seatmate.
Fifteen hours stuck next to the definition of tall, dark and handsome,
and the only thing on his mind on our trip from California to Sydney… was me.
Ky Bateman made no secret of the fact he wanted me, and I made it clear
he drove me crazy.
When my resolve finally wavered, we made a bet. I lost, he won, and I
found myself on the back of his motorcycle, on the adventure of a lifetime.
I never intended to fall for the master manipulator, especially when I
knew I was keeping secrets that could destroy everything between us.
All good things must come to an end, right?
Except our ending was one I didn’t see coming.
Author note – Master Manipulator is a full-length standalone novel. Due
to strong language and sexual content, this book is not intended for readers
under the age of 18.

Sign on the dotted line…
I, Carla Star, agree to marry you, Corton Whiskey, on the date supplied in the attached contract. In signing this document, I agree that I shall not, by any means, try to break this contract. I understand that if I do, the envelope held in escrow will be released to the parties identified within the contract, and I shall forfeit my right to the privacy currently afforded to me by the aforementioned Mr. Corton Whiskey.

I received this contract, hand-delivered, and I’m now staring at it in disbelief. Me, the daughter of a senator, is being bribed by a one-night stand.

If he thinks he can blackmail me with his perversions, he can damn well think again. 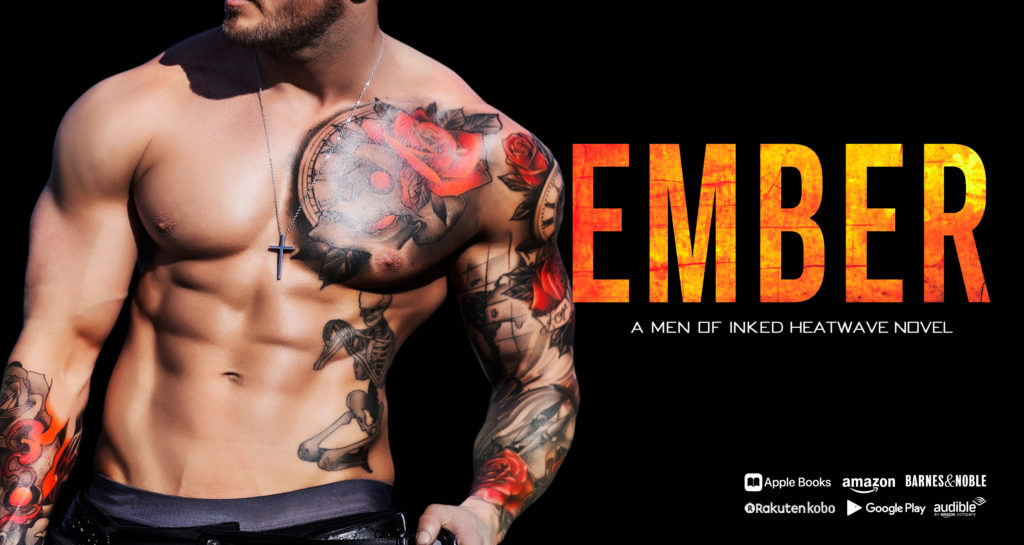 Ember by Chelle Bliss Out Today 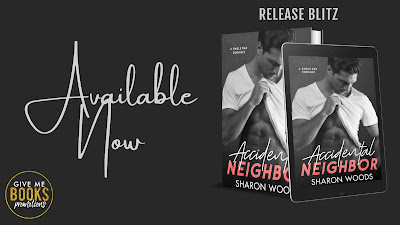