Review: Hate to Date You (Dating # 4) by Monica Murphy 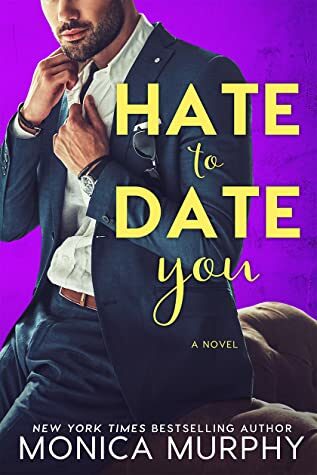 I love this world and group of friends that Monica Murphy has created at Carmel by the Sea.  I read book one of the series, Save the Date, but have not read book 2 or 3.  All of the books in this series can be read as stand-alone books.  I have always been a fan of Murphy’s books; however these books have a different feel then her previous offerings.  These are fun, lighthearted romance.  You still get her dynamic independent women characters going up against these know it all dominating men they just have an easier readability about them.

I fell in love with the character of Stella Ricci when she appeared in book one as Caroline’s best friend.  She has a strong and feisty nature.  You just know when you get her story there are going to be sparks flying.  What I wasn’t prepared for with Stella was her self-doubt and lack of confidence to standing up against her dominating Italian Family.  Stella seems a bit lost and unsure of what her future looks like.

Enter in Carter Abbott.  Carter is Caroline’s older brother. He left the Carmel area 10 years before to escape his unhappy childhood and make a future and name for himself.  Carter went to Southern California and became a real estate agent with hopes of earning a fortune and successes in selling property.  A blow up with a girlfriend/co-worker and feeling at odds with his current situation has him moving back to the Carmel area at the instance of his baby sister.  Unsure of what his future looks like he is just drifting.

Stella and Carter had a one night stand a year previous that was hot and sexy and fun, but to much intensity for Carter so he totally ghosted Stella.  Now that Carter is back in the area and slightly aimless his sister comes up with the brilliant idea that Carter should take over her roommate duties at Stella’s apartment.  Stella wants nothing to do with Carter. These two are fight against their feelings so hard.  Both seem to lack the confidence to make the first move. Plus, you add in a tiny Italian Grandma, 3 overbearing Italian bothers and a baby sister who is a scammer and you just know this story is going to be great.

I really did want more between them. Once the story got moving it moved fast. I would have liked to seen more of the pull back and forth between them . They had so much chemistry. It isn’t until the mid point of the book that you start understand Stella and her hesitance in starting a true relationship with Carter. I wish we had been privy to that insight from the beginning.

This is story has passion, laughs and great characters.  It was a fun easy flirty read.  This is was 3.5/5 read for me.  I just need it more.