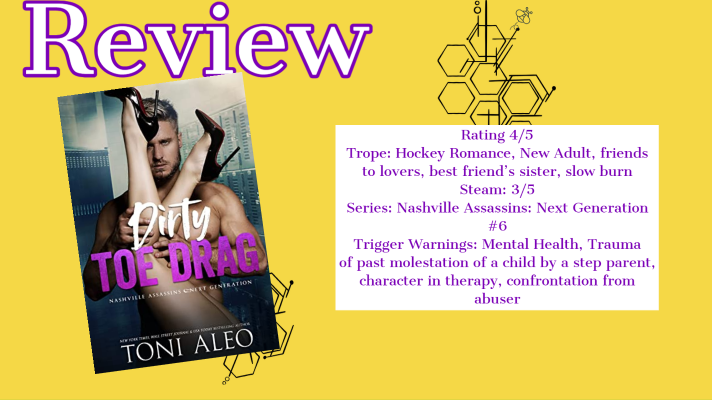 This was the perfect addition to the Nashville Assassins: Next Generation Series. This is the third full length book in the series, there are several novellas and crossover books. Dirty Toe Drag can be read as a standalone.

Stella Brooks has had her life worked out from a young age, she was always going to be a fashion designer until she found a love for cupcakes…. She is also surrounded but a supportive family.  She works hard both in school and at 2 jobs.  She knows that she is privilege and is thoughtful about it. While she is young in this story, 19, she has a maturity about her.

Wes has hockey.  Hockey is everything for him. It is his family. It is the source of his friends and his support system.

Wes and Stella have an intense make out session at her brother’s wedding, but it was only one moment after dancing around each other for the last year.   Wes is a player on and off the ice, her brother’s friend, and teammate and that makes anything more between them impossible. But Wes is drawn to Stella and is trying to put his attraction to her on hold while he deals with his past. Wes does bring some big swoony moments. You will be added a book boyfriend to your list.

This was a very emotional read and honestly my heart broke as I read what Wes had gone through, this story is captivating, it’s written with compassion. It deals with some heavy topics that the author does treat respectfully and thoughtfully.  Previous novellas in this series have been over the top and seriously border line on the ridiculous. I was hesitant to pick up the book, but I am very glad that I did. It was a well written, well done story.

The chemistry and fliting between the characters is masterly done.  This is a slow burn romance and while not always my favorite in this book it makes sense, and it matters.  Wes is respectful of Stella being younger and his best friend’s sister.  He also realizes to be truly intimate with someone he is going to have to open all aspects of his life to her.  Watching their relationship grow as they both showed their vulnerability as well as their strength works so well in this story.

This books brings intense emotions but it does have moments of humor supplied by the chaos of supporting characters like Stella’s little sister Emory.

While there is a lot to unpack in this story it is a worth a read.  It is light on the hockey but you do get the feel for the family and team dynamic.