Bookcase and Coffee is for the lover of Romance, Coffee and the HEA.
On the book shelf (TBR List) promo 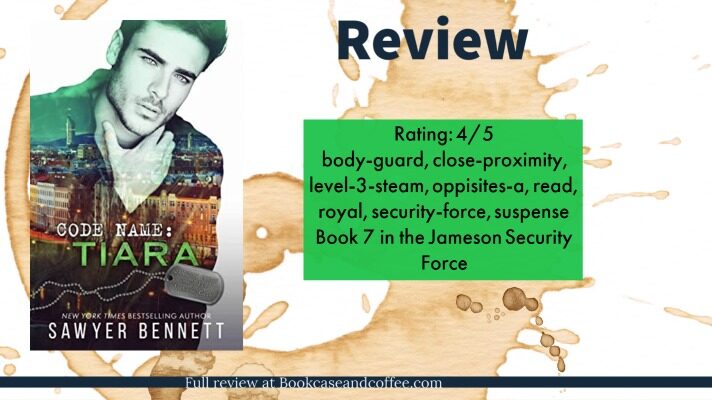 Another great offering from Sawyer Bennett. I really enjoyed Jackson and Camille’s Story.

Jackson Gale team members at Jameson draws what he has decided is the crappiest of crappiest assignments.  Heading up a team to guard the Princess from Bretaria. He just knows that is going to be a spoilt brat, who wants nothing more than to be pampered and go on shopping sprees. Imagine his reaction as he gets to know Princess Camille. I don’t think he could have met anyone more down to earth and as caring as she was. She could be strong with the best of them, but she had such a tender heart.

Camille Winterbourne, who is the Princess of Bretaria and next in line to the throne, is not thrilled that she is going to have new security when she takes her long awaited trip to the United States. She can’t understand why her father’s typical head of security is not accompanying her and she knows something is up, but she also knows she’s being kept in the dark. She’s not at all looking forward to spending time with the new bodyguard.

As Camille and Jackson get to know one another, it’s immediately apparent that neither are what the other thought they would be. Camille is about as low maintenance as one can be and still be a Princess and has the biggest heart.

The attraction is instant between them. However, Jackson is a professional and won’t cross any boundaries. Although, once he spends more time with her, their relationship intensifies and gets fiery when they don’t hold anything back and take it to the next level. But they both know that time is not on their side.  Once they are back at the palace things will be over.

This is a great addition to this series and if you love a bodyguard romance, then you can’t go wrong here. We also hear a little bit on the others at Jameson, which I love knowing more and more in that world.

Cover Reveal: Play the Hand you were dealt