Review: All In by Erica Marsela 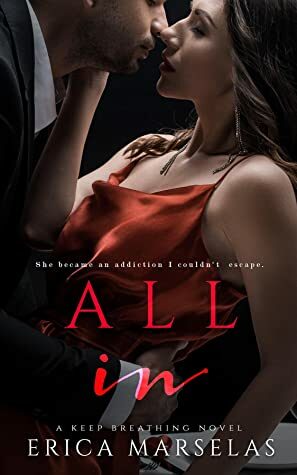 This girl loves a Secret Baby Romance! Then the author went and made him a millionaire, add in it is an office romance and instant connections and this reader was ALL IN!  On top of all of that this had one of the most EPIC twist I have read in a very long minute!  But every page, every second was engaging and again I was ALL IN!

Liam is a recovering alcoholic and painkiller addict. His recovery is still very fragile.  I don’t think Liam has faced all his demons completely.  He isn’t working a tradition 12 step program either.  So with all of that he still has a lot of potential triggers.  One of the standout things about Liam is his dedication to his work.  Making his father’s company his own and leaving his own mark on it was a priority even when he was deep in his addiction.  He has surrounded himself with an amazing team of friends that care and are on his side, even when his family is fighting against him.

Holly single mom after a one-night stand.  She is just getting career back on track after having had her son Matty.  She is given a chance to do a large re-decorating on Liam’s building after his last designer quit.   A brief chance encounter before she starts the job leads to flirting even before Holly starts the job. Holly coming face to face with her one-night stand and father of Matty, on top of her very strong attraction to him, with the added piece of working for him makes for one spectacular love story.

Most of my issues in the story are with Holly’s easy forgiveness and complete acceptance of Liam behavior.  While he does have reasons behind his responses, I wish she had challenged him more.  I wish she had while embracing him maybe shaken him a bit.  While given his history and his battles some level of forgiveness needs to be there but there also needs to boundaries and rules.  He seems to not have any.

I also had a couple of issues with Liam and his responses to his family.  It is very clear from the opening pages he views them as toxic.  He sees them as these people who do not accept him nor support him.  There is a change in them with in the story those relationship seem to go through a radical 180, but the author does not show us the catalyst for some of the change of their behaviors.  It is hinted at but never really stated. Especially for Liam’s parents, I think it would have helped with character development and understanding of behaviors if we had even had a bit of a peak into it.

I will not spoil the ending, but I will say it kind of smacks you in the face and leave you standing there with your mouth hanging open. The truly best part of this story outside of little Matty was the twist!  Be ready friends is a good one!

This was my first time reading this author. I read this as a stand-alone story.  I really enjoyed her writing style.  There was steam and storyline development. There was never a moment for me when the story dragged, or I felt something was unnecessary for the forward momentum of the story.  This was a 4/5 read for me.

Better than Sexy by Carly Phillips