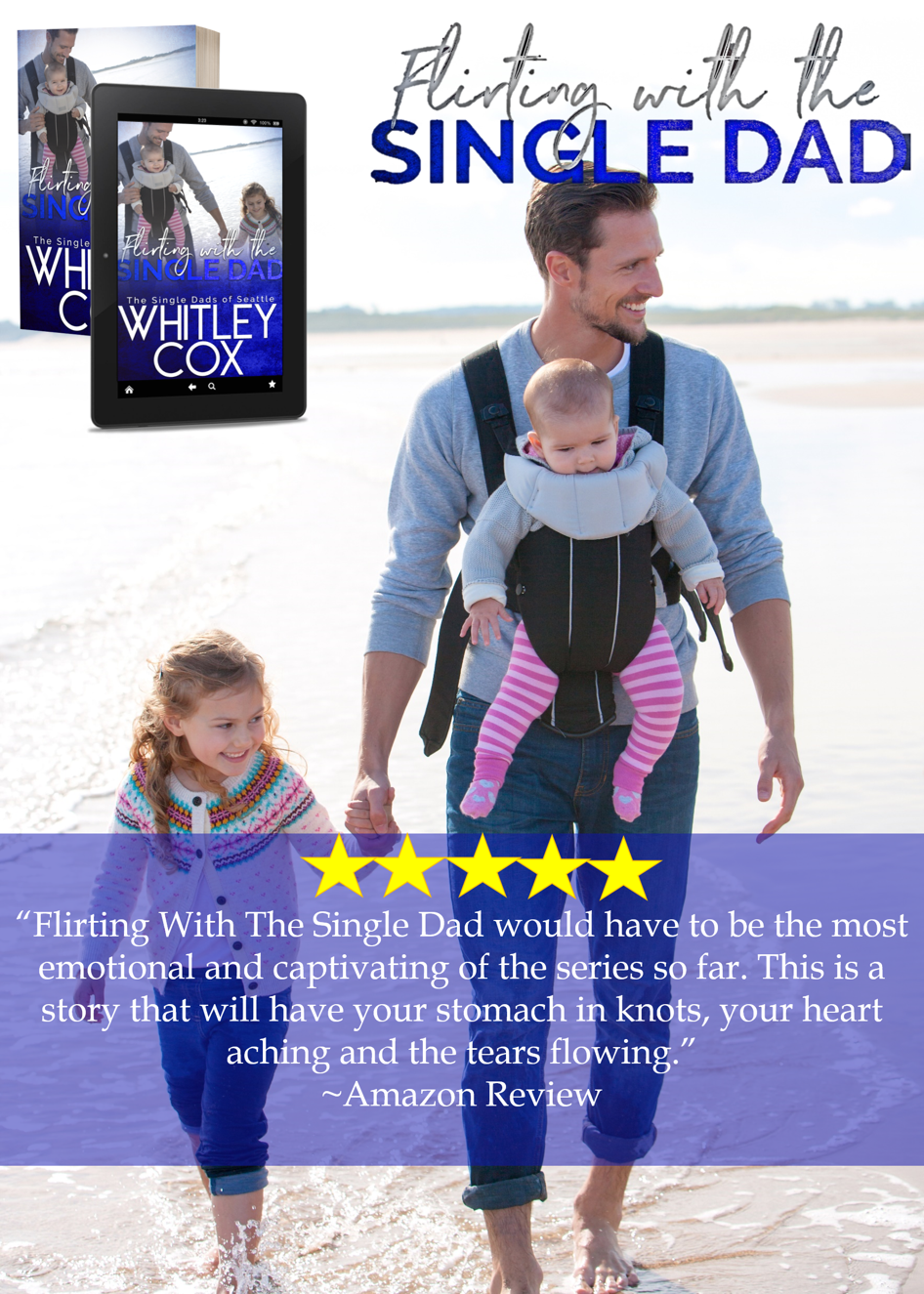 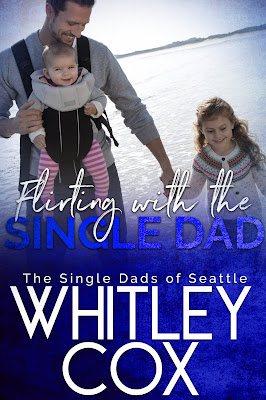 When first impressions happen twice.
Welcome to Seattle, the Emerald City and home to The Single Dads of Seattle. Ten sexy single fathers who play poker every Saturday night, have each other’s backs, love their children without quarter, and hope to one day find love again.
This is Atlas’s story …
Single Dad of Seattle, Atlas Stark is in over his head. A widower, he’s been left to raise his daughter, and his infant cousin alone, while also trying to make partner at his law firm. If things at work weren’t stressful enough, his home life is getting hairy too. His daughter’s acting out, eager for her father’s attention, and she’s taking it out on the baby. Already stretched too thin, he’s one frayed strand away from snapping. Desperate for help, he takes her to see a therapist. What he doesn’t count on is her being a tall, blonde knock-out with sapphire eyes and penchant for motorcycles. Too bad she annoys the crap out of him.
Tessa Copeland’s life has never been easy. With a chronically ill mother, she was forced to grow up quicker than most. A successful art therapist, she’s determined not to let her baggage set her back. Until her fiancé cheats on her and takes her dog. She’s never brought her personal life to work, but she can’t stop thinking about the father of one of her clients, or the fact that he’s an assuming jerk with a smolder that gets her engine running. But things grow blurry when she finds herself seeking legal counsel from the broody Atlas, and even though the two continue to butt heads, their chemistry is undeniable.
Will flirting with the single dad lead Tessa down a dangerous road riddled with potholes and blind turns? Or will it be exactly what they both needed to finally feel whole again?
**Note: This book can be read as a standalone. It includes lots of steamy scenes, cursing, and of course as with all my books, this has an HEA and no cliffhanger or cheating. If you like single dads who take charge, this book is for you.

“This is a book that ticked all my boxes, I laughed at the classic one-liners only a child can deliver, I smiled, I swooned and I shed a tear as Atlas and Tessa got to know each other. Whitley Cox has an amazing way with words, she draws you in and has you feeling like you are catching up with friends with each book in this series. I highly recommend this series to all lovers of romance and all romantic comedy lovers. Looking forward to the next in this amazing series.” ~ (Jackie Wright Goodreads Reviewer)

“Flirting with the Single has to be the most emotional book so far in the ‘The Single Dads of Seattle’ series! 9 books in you wouldn’t think that author Whitley Cox could come up with such great storylines again and again. But she does.” ~ (World of Books 65 Goodreads Reviewer)

“Flirting with the Single Dad [The Single Dads of Seattle Book 9] is FAB-U-LOUS! I loved reading Atlas & Tessa’s story. I loved this story from page 1 and could not put it down, the attraction and instant fireworks & chemistry between Atlas and Tessa jumps off the pages! I loved everything about this story & even knowing the HEA I would read it again. Whitley Cox is a wonderful writer and she has a winner with her Single Dad’s of Seattle Series!” ~ (Cheri Amazon reviewer)

His smile was magnetic. “Fuck, you’re smart.” The gray in his eyes turned almost silver. He stood up and approached her, his body feeling extra big and tall as he invaded her space and pinned her up against the door. His warm breath beat rapidly against her lips. His jaw was working and his eyes so intense, they seared her.
Her eyes shot up the stairs toward the hallway. Aria could come out at any time and see them there. Then what?
“I … I should go,” she said, but her body said differently, and she turned to pudding against him. Her knees buckled, and she would have fallen into a heap on the floor if he hadn’t pressed his hips against hers to hold her up. She could feel his need for her against her thigh.
“You should go,” he whispered against her jaw, his breath kissing her in a way that made prickles race along her skin.
“I should go.”
“You should go.”
“I should go.” Her purse landed on the floor with a thud, her arms wrapped around his neck at the same time his hands gripped her butt cheeks, and he hoisted her onto his hips. Her lips parted for him as his tongue swept inside, claiming her, tasting her, devouring her. Still carrying her, he headed back down the stairs toward his office, but they didn’t make it there before he stopped in the hallway, her body still perched on his. He pressed her back hard against the wall. She whimpered when he bit her bottom lip, her chin, her jaw. His teeth scraped; so did his beard.
Almost as if they hadn’t just had sex half an hour ago, the man was practically frantic, the way his hands roamed her body, caressing and kneading. His fingers traced along her arms, lifting them above her head, where he pinned them up with one hand. His other hand made surprisingly quick work of his jeans. She had to hand it to the man, holding her up against the wall with his legs, keeping her arms up with one hand and unfastening his jeans with another—he continued to surprise her with his prowess and talents.
She had underwear on, but he’d just have to pull them aside to—rip. Oh, well, then never mind. He’d torn them clean off. 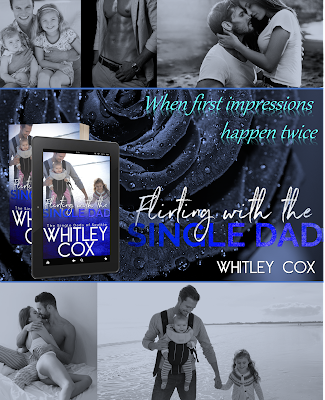 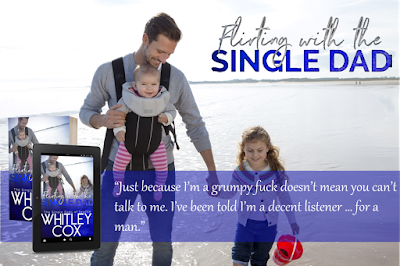 A Canadian West Coast baby born and raised, Whitley is married to her high school sweetheart, and together they have two beautiful daughters and a fluffy dog. She spends her days making food that gets thrown on the floor, vacuuming Cheerios out from under the couch and making sure that the dog food doesn’t end up in the air conditioner. But when nap time comes, and it’s not quite wine o’clock, Whitley sits down, avoids the pile of laundry on the couch, and writes. 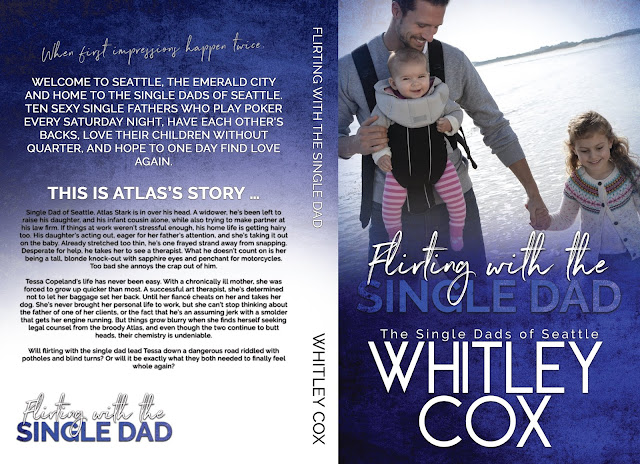 New Release: A Date for Midnight