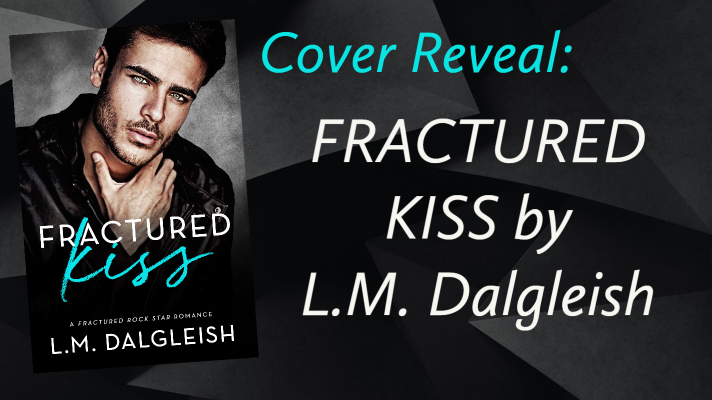 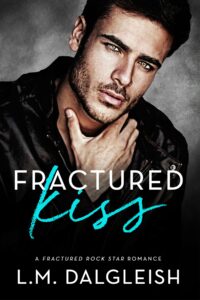 Synopsis:
What started with a kiss just might end up breaking all his rules—and her heart…

For guitar tech Cassie Elliot, being trapped on tour with her suddenly-ex-fiancé is like a bad dream.
She never expected to be rescued from her nightmare by one of the hottest rock stars in the world—Zac Ford, the enigmatic, sexy bass player for Fractured.
One impetuous moment, a kiss that shouldn’t have happened, and now they’re stuck pretending to be in love.
She’s determined not to develop real feelings for a man who’s only doing her a favor, though.
Because Zac may have kissed her, but that doesn’t mean he wants her.
And there’s no way falling for him could end in anything but more heartbreak…

Zac let his control slip one time, and now his distractingly pretty guitar tech is staying on his tour bus, sharing his hotel room, and looking at him in a way that almost makes him forget what’s real and what’s not.
But fake is all their relationship will ever be. Because there’s no way he’s going to allow himself to get emotionally involved with any woman.
Particularly not one who goes against all his rules like Cassie.
The music, the fans, and getting his next album finished—that’s all he cares about.

And he won’t let one little kiss change that…

Fractured Kiss is the fourth book in the Fractured Rock Star adult contemporary romance series and can be read as a standalone. It’s a steamy, angsty, slow-burn, fake relationship/forced proximity love story with no cheating, no cliffhangers, and a guaranteed happily ever after (HEA). 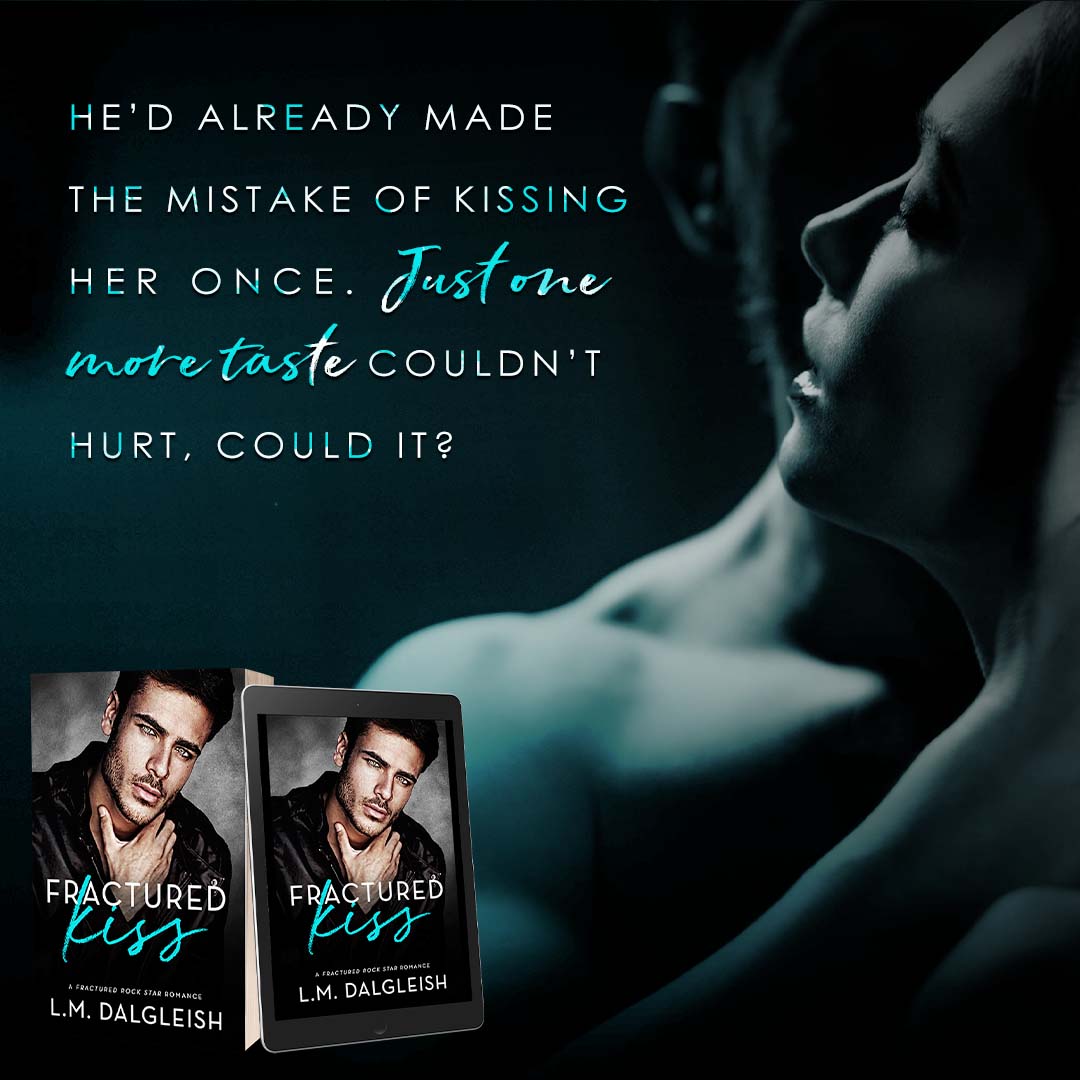 “Sit down.” She pointed at the bench seat he’d been sitting at before. The one that had space behind it for her to stand.

Zac eyed her with curiosity but did as she asked. “What are you doing?”

She moved behind him. “I’m going to give you a shoulder massage. I used to do it for Bryan all the time when he was stressed.”

He twisted to face her, his brows drawn together. “You don’t need to—”

“I want to. You can consider it a thanks for helping me out.”

Apparently, he was stubborn as well as being a workaholic. “Then just consider it part of my job as your guitar tech. How can you play your perfectly tuned basses to their full potential if you’re all tense?”

He gave a low laugh. “Well, when you put it that way.” He turned around, then glanced over his shoulder at her. “Is it okay if I take my shirt off?”

Cassie’s cheeks heated when he stripped his T-shirt off and held it balled in his hands as he leaned back against the seat.

She let out a quiet breath, then placed her hands on his shoulders and pressed her thumbs into his muscles. He said nothing, just let his head drop forward so she could work.

It didn’t take long for Cassie to regret her offer. She was so used to giving Bryan massages she hadn’t thought how different it would be to have her hands on another man. A man who—as much as she was trying not to notice—felt a little too good under her fingers. Her thumbs made small circles up the back of his neck, brushing the tiny velvet strands of hair at his nape. Her breaths grew uneven.

He smelled good too. Obviously, he showered after the concert. The fresh, masculine scent filled her senses. It was slightly intoxicating.

She worked her hands back down, her thumbs rolling over the leather cord he wore around his neck. She’d seen the pick that hung from it a couple of times when it had slipped out from under his shirt. She wondered what sentimental value it had. Was it his first pick? Did it once belong to an idol of his?

It wasn’t the right time to ask. Not when she was trying incredibly hard not to notice how smooth and warm his skin was. She was suddenly all too aware of the width of his shoulders and the densely packed muscle that covered them.

Zac’s breaths deepened as she worked, and when she pressed her fingers into a particularly tense knot, he let out a deep groan. The kind of groan that conjured up visions of sweaty bodies and tangled sheets. Heat unfurled low in Cassie’s belly, and her fingers trembled.

The muscles that had loosened under her ministrations tightened. Had he noticed her reaction? After a frozen second, it appeared he was merely shifting position. He tilted his head a little to the side, allowing her to work her way back up his neck.

Now Cassie was hyperaware of him. His every breath, his tanned skin, the warmth emanating from him. It was shockingly intimate. She’d never been with anyone but Bryan. He was her first and only. But her mind suddenly filled with visions of Zac. What would it feel like being naked with him? Running her hands over every inch of his body, not just his shoulders.

What would it be like to have his hands all over her body?

What would his stubble feel like rasping against her inner thighs? What would his hips feel like, pressed between hers? Would he fill her so completely, she wouldn’t be able to think of anything but him? Would he make the same groan when he—

Cassie inhaled sharply as arousal blasted through her. Her nipples tightened into diamond-hard peaks, and she jerked her hands away, almost stumbling in her haste to step back from him.

Expecting him to turn around and ask what was wrong, she crossed her arms over her chest to hide her physical reaction. Her mind reeled, preparing to give him some lame excuse about her hands getting tired.

For a few seconds he didn’t move at all. He faced away, his spine a rigid line. When he finally turned to look over his shoulder at her, his hazel eyes were dark. They raked over her, and she licked her lips and took another half-step back.

They stared at each other. Could he see the thoughts written on her face? Was she looking at him exactly the same way all those other women did? Cassie’s cheeks heated. Please don’t see it.

Zac cleared his throat. “Thanks, that was… good.” His voice was a little rougher than usual, but that was it. He couldn’t know that she’d been fantasizing about what it would be like to have him inside her.

The tension gripping the back of Cassie’s neck loosened a little. Maybe it wasn’t as obvious as she feared. Maybe she was just overly sensitive to her body’s reaction because she hadn’t expected it. Not so soon after Bryan.

She gave him a tentative smile. “No problem. I’ll, uh, let you get back to it.”

She retreated to a safe distance, picked up her notebook and slumped down on the couch. A quiet breath gusted out of her. That was unexpected. Not that she didn’t find Zac attractive, but she’d never fantasized about him.

Not like that, anyway. Maybe the occasional glance at his firm, masculine lips or a furtive look at his abs when he pulled his T-shirt up to wipe sweat off his face after a performance. But certainly not with the kind of vivid imagery that made her body react as if they were actually naked together.

Her eyes cut back to Zac again. He’d picked up his guitar and his fingers danced over the frets, his mouth moving silently through a song. Heat crept over her skin again as she watched the muscles in his forearms flex.

She let her head thunk back against the wall.

Great. Just what she needed. A silly crush to make this horrible tour even more hellish.

Other Titles Within this Series 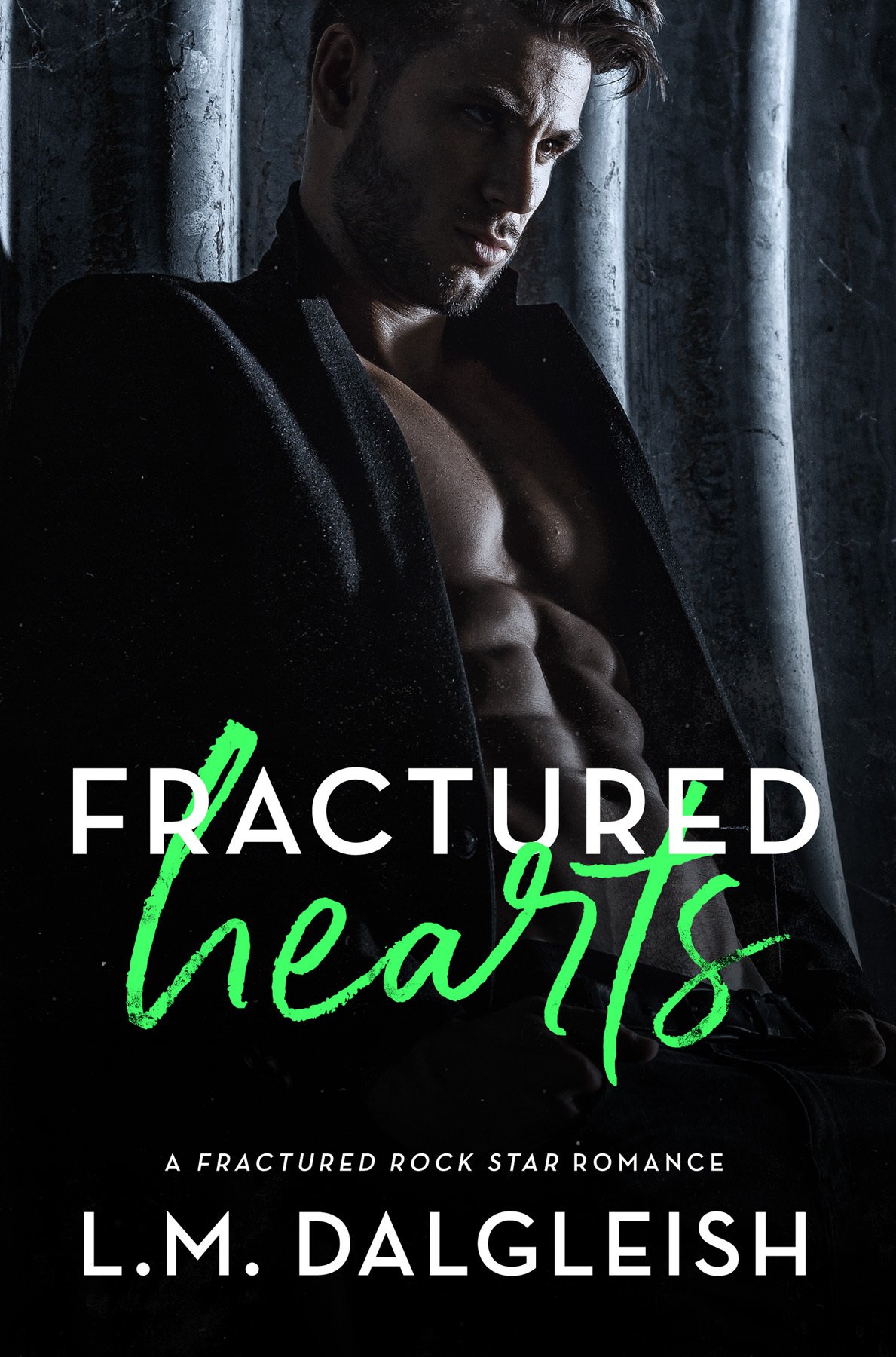 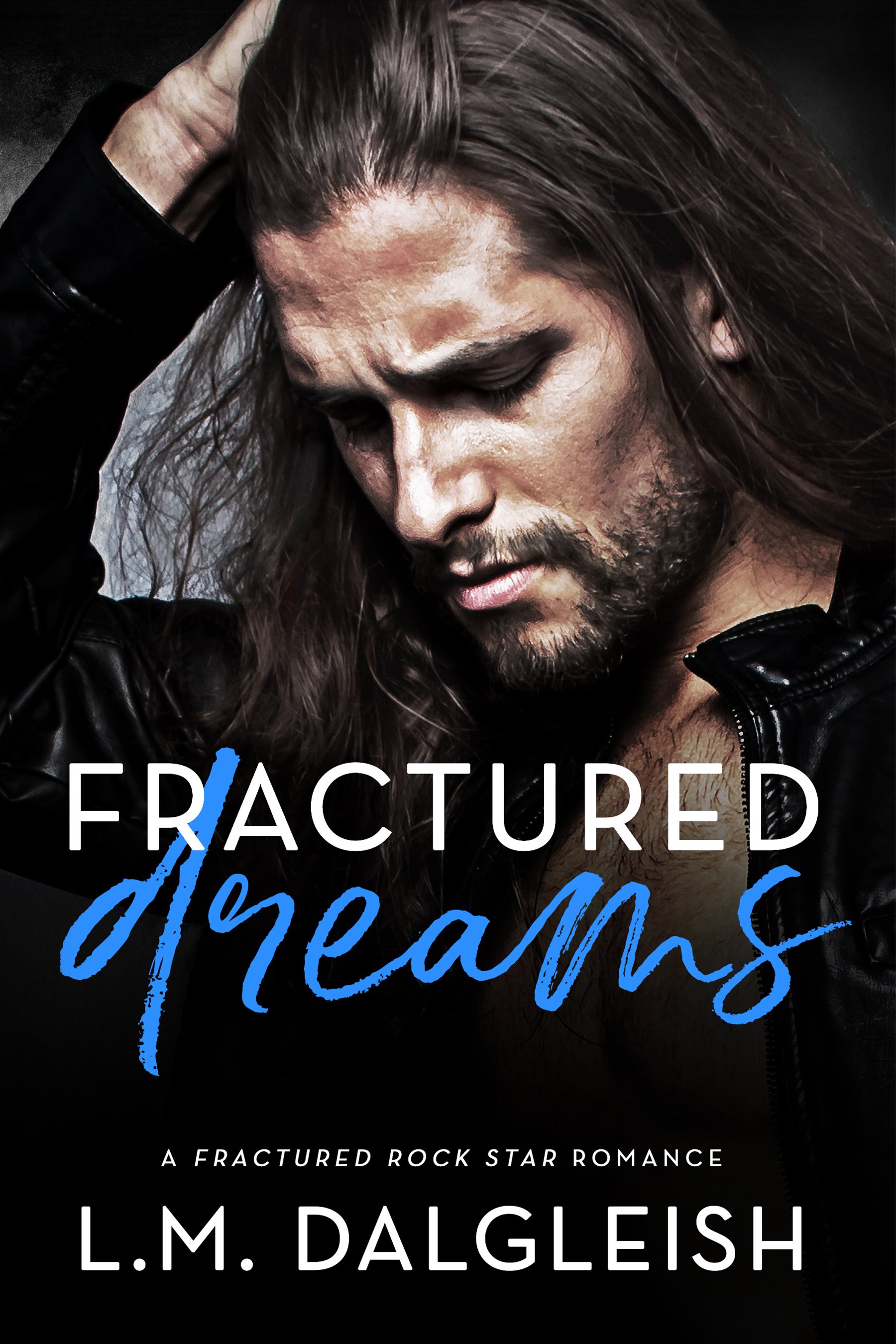 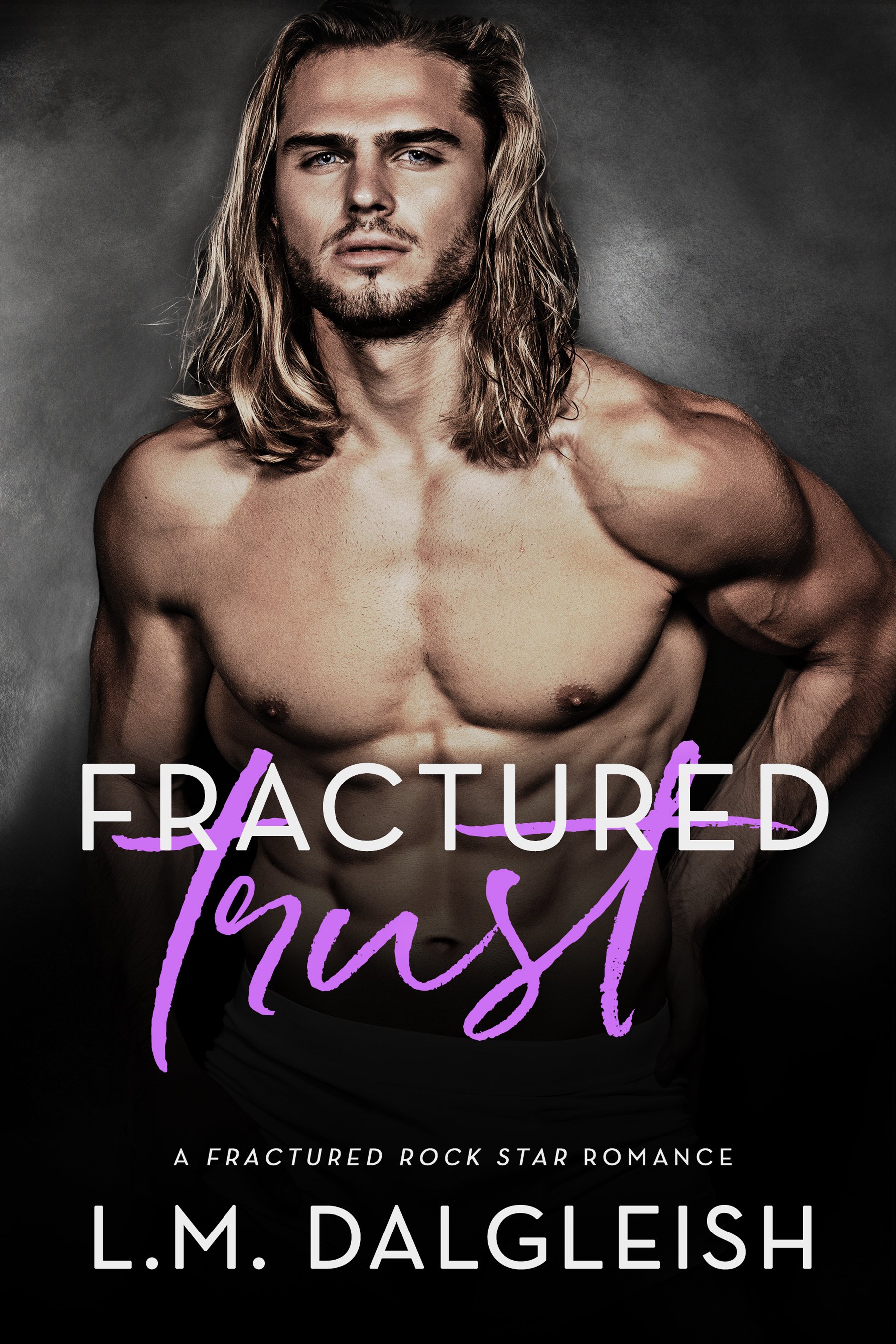 L. M. Dalgleish is a life-long book lover who, as a child, used to shut herself in her bedroom with a good book and a packed lunch so she could spend all day reading. Her passion for romance novels began in the long sleepless nights following the birth of her first baby. Two more babies later and she’s still in love with strong, sassy heroines and sexy, but emotionally unavailable (at least to begin with) heroes.

She lives in Canberra, Australia, with her husband, three kids, and a very large, very fluffy cat. In her spare time, she enjoys hanging with her family, reading, eating too much pasta, and watching horror movies. 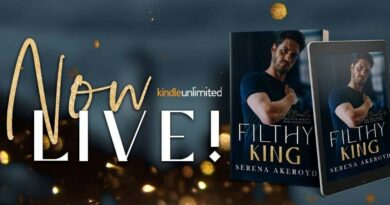