Bookcase and Coffee is for the lover of Romance, Coffee and the HEA.
Current Drip On the book shelf (TBR List) Orders up promo Recently Brewed Reviews

By Sin I Rise | Cora Reilly 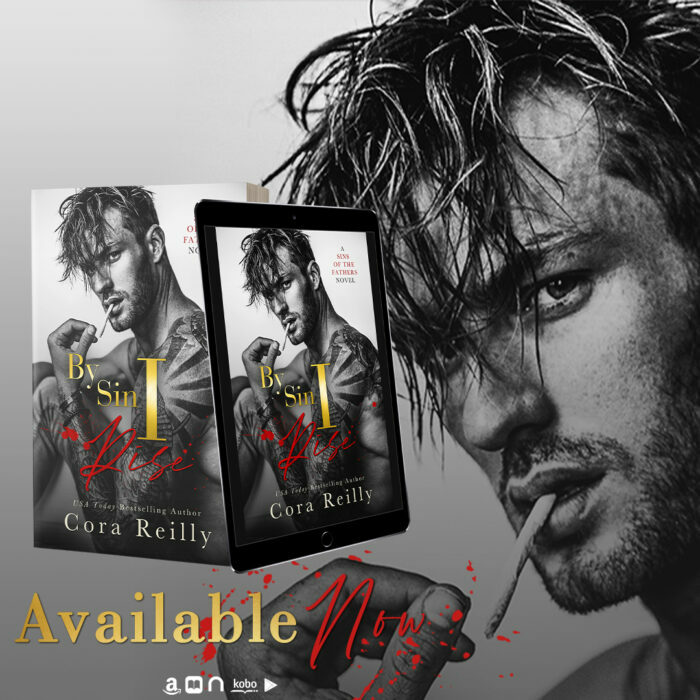 They say that there is a fine line between hate and love.  And Maddox White definitely hated Luca Vitiello and his family.  Luca Vitiello took his family from him and he was dead set on getting revenge on the man he will never forget. What is the one way to break a man?  Through the people he loves the most.

To say that Cora Reilly fans have been waiting for this second generation stories to be told is understatement.  But fans, this one was worth the wait.  Marcello, the first born daughter of the Capo of the New York mafia has a bit of a reputation for being a spoiled princess.  And I loved how she played into the role, but really made readers wonder if that is who she really is.

Reilly did an amazing job of creating characters that you love to hate.  I know I was supposed to dislike Maddox, but there is something about him that makes you want to cheer for him. However,I also loved the way he grew emotionally throughout this book. His fellow MC members were easy to hate.  And really, really disliked them.

Throughout this book Marcella really came into her own, and showed her strength.  It is clear this girl is a Vitiello and the way she handled herself in stressful times was amazing.  I found myself loving how much she was like her father. The snippets into the life that Marcello and Vitiello family have lived after we left off with them was also wonderful. We were able to see the inner workings of the family, and the beautiful family that Aria & Luca have created.

I enjoyed how these two separate worlds collided for Maddox & Marcell, especially when the odds are stacked so far against them.  I was a little disappointed at first when Cora Reilly announced this was going to be a two part book.  But now, I see it.  It is perfect. Their story isn’t simple. I can’t wait to see where she takes these two.

I would not recommend this as a standalone, the Bound series really must be read prior to reading this book.  But to be real, you will be rereading the Bound books after this book just to tide you over for part II.  This book made me fall in love all over again with the made men of the NY mafia!