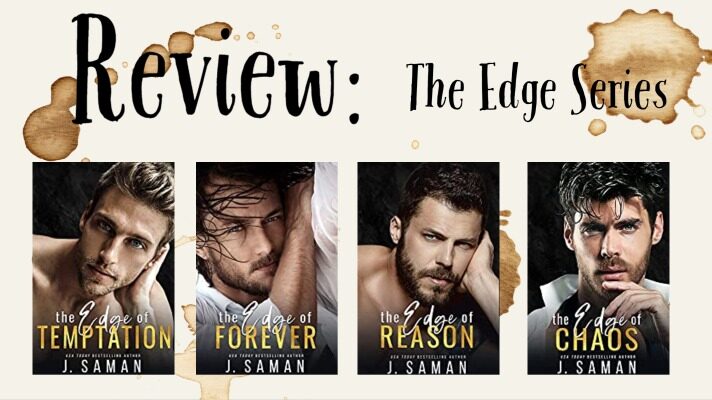 Earlier this summer I discovered J. Saman from a TikTok rec.  I went down the rabbit whole of her Wild to Love Series and have since become a HUGE Fan.  I seriously will keep recommending them and encourage people to giver her stories a try.

What I love about her books.  She writes these characters that are complete.  Their development and quirks make sense. They have back stories that are unique to them but also relatable.  Even in a billionaire romance or a rockstar romance there is something about the characters that have you instantly connecting with them.  Even her romances that are a slow burn have so much chemistry that you are just anxious for them to take that step to claim all the feelings and emotions swirling around them.

Book 1
The Edge of Temptation

Halle Recently dumped her fiancé, Matt right before his life imploded. Unfortunately for Halle, the FBI comes to her work, and she got hauled in questioning.  Time for a new job.

But her friends want her to have some fun before she starts her new job.

Imagine her surprise when she finds out that Jonas, her fling, is now her boss.   Jonah didn’t want anything but one night away from the pain of losing his wife two year before.

The Edge of Temptation is about two people who aren’t looking for love, one due to loss, one due to heartbreak.  What you do get from this book is a sexy emotional one-night stand romance.  Of course, Jonah is her new boss. The way this story plays out is just perfect.  But he is also charming, needs to figure out how to live in the present and stop just existing.  I absolutely recommend this book!

Book 2
The Edge of Forever

We all know the Second Chance Romance isn’t my favorite.   The Edge of Forever was a very good Second chance romance.

Aria and Wes’s story is so relatable.  The boy next door that is also your brother’s best friend.  Secretly crushing on him.  Aria has always had these very big feelings, but they are very self-contained. For an artist I don’t think she expressed her true nature well.

Wes is a super swoon worthy character.  He has always had this connection to Aria.  But to respect her he keeps his distance. He holds to a promise he made his friend that he would not date his Best Friend’s Sister.  I really loved Wes. Typically, a surgeon would be over the top arrogant, but Wes is not like that. He has a gentleness about him that really captivates you. You want Wes to get his HEA.

For me this book falls short with Aria. I just don’t connect with her. I think she is kind of selfish and single minded. Her life is about her and her art, she will squeeze you in where she can fit you. Which is ok but given Wes’ level of devotion to her I just didn’t think she was as all in as he was.  I get the quiet strength piece.  But she had no issue articulating to Drew that they were over and why.  I just wanted Wes to have someone that gave him the big love he was putting out in the world.    This is ok.. you can skip it and still move on with the series

Book 3
The Edge of Reason

Friends to lovers you say?  Best Friends to Lovers?  He use to date one of your closest friends?  What could possibly happen?  But One impulsive kiss to save a friend some embarrassment is going to tell us.
In The Edge of Reason, Margot and Drew are facing this very dilemma.
Margot and Drew are always together. They work together, almost every shift! She a nurse, he an ER doctor. Most importantly, they’re best friends who love to spend time together. One impulsive kiss, however, changes the whole dynamic between Drew and Margot.

This one kiss leads to questioning what you are doing. What matters most to you. Who your loyalty belongs too. Also are these feelings true is it a reaction from outside influences, return of an ex, getting over an ex, or simple loneliness.

I love Margot and Drew. Not just as a couple, but also as individuals. Drew is a guy who knows what he wants. Yes, he always has seen Margot as a friend, but that’s until ‘the kiss’. I love how he doesn’t question his feelings, how he’s all in.

Margot on the other hand is the hesitant party. From the moment she met Drew she was attracted to him but working together and the fact he had a girlfriend she quickly put him in the friend zone.  Her past has taught her not to trust easily, and her romantic choices haven’t always the smartest. So yes, it’s very understandable she doesn’t want to ruin her friendship with Drew. Margot and Drew are an amazing couple!  They are by far my favorite in this series!

Book 4
The Edge of Chaos

“Don’t run because it’s what you always do. Stay because you never have before.”

The Prologue sets up for some major emotions in this story.

From the start Brecken had stole my heart, he had me swooning the instant he found Rina in that bar playing trivia and he swept her off her feet. They have a steamy romp then Rina walks away thinking that is the very last time she will ever see the guy that gave her the best night of her life ever again.

Three years later in Boston where Rina is better but has some major demons she is still fighting.  A typical meet us with her friends has her coming face to face with Brecken her sexy voice from 3 years ago.

Brecken is often described by his sister Aria as a playboy who loves them and leaves them. Aria having warned all her friends to NOT date her brother.  Aria has also warned her brother he is NOT allowed to date her friends.  (You know while she is dating his best friend, hypocrite much?)

Brecken could never forget the angel he had three years prior and now she is ultimately the most off limits any woman has ever been, but he can’t help the attraction he feels between them.

Brecken was pure perfection, he made me laugh one second then swoon with his alpha growly self the next. Rina is a tough character that has been through some serious trauma, so she has built her walls up high to keep people at a distance which is understandable after we learn what her secrets are.

What I loved the most was how they shared their secrets with each other to understand each other better. The connection and power that comes from sharing their stories and being vulnerable in this story is flawlessness. Because of their connection and how they communicate Brecken truly sees Rina for more than the persona she shares with the world.

I love this story but could have done with Aria. This story just cemented all my thoughts on her from book 2.  She is all about herself. She lacks an empathy for others. While I get she was hurt in Highschool… this is 10 plus years later….move on already lady.

Review: Love to Tempt You by J Saman

Review: The Bookworm’s Guide to Dating by Emma Hart